Critical levels can be reached this winter.

In our blog of January 16th, we focused on the very low hydrological balance across the CWE region. The hydrological deficit is still about 20 TWh lower than normal which may result in nearly 5000 MW reduced hydropower (- 25%) during May-July.

In this blog post, we will focus on the hydropower situation in Switzerland. Switzerland relies on 65% of their power supply from hydropower, and this winter the supply situation can be threatened if additional nuclear capacity does not come online during February. The hydro reservoirs are at all-time low levels and are forecasted to decline even stronger the next weeks to come, see chart below. 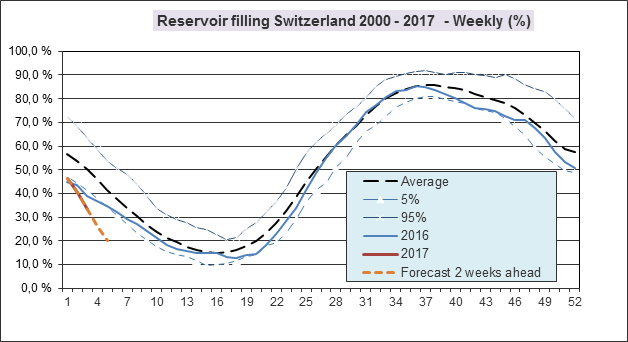 The chart from Medium term/reservoirs from the hydrology section at Wattsight underlines the current situation. In this chart, you see forecasted Hydro-reservoir curve during the summer until the end of the year. The forecasted levels weeks 13 – 15 are extremely low, and maybe it is not possible to force the reservoirs that low. Thus we have made some scenarios with different production strategies and also checked the power balance and the introduction of additional nuclear capacity by mid-February (Leibstadt – 1200 MW).

We have made a High and a Low reservoir scenario in addition to the Base scenario displayed on Wattsight (see above).

In the High scenario, we adjust the reservoirs not to come lower than earlier minimum levels by weeks 13-15 (7%), while we in the Low scenario have lowered the reservoir curve to reach statistical minimum level by Sept 1st. Scenario High means reduced production until week 15 compared to the Base scenario. Scenario Low means slightly higher production during summertime.

Production curves come out as displayed in the chart below: 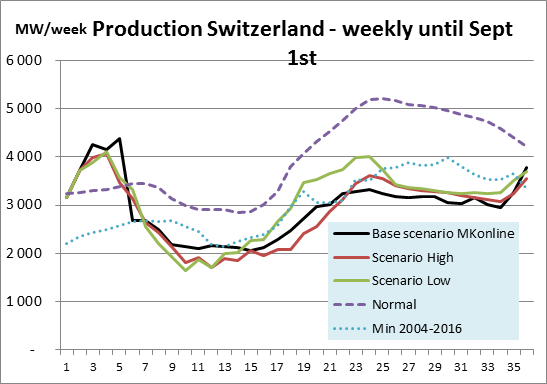 Detailed studies of the power balance show that start-up of the nuclear plant Leibstadt (1200 MW) announced for week seven can not be further delayed if the country wants to avoid problems with their power supply. It was a difficult supply situation last year too, but then the situation was partly saved by mild and wet weather during January/February. The current situation, however, is already worse than 2016.

Wattsight will continue to update you on the Swiss situation. We update our reports daily, and we are going to publish new blog stories as soon as we new information during February is available.