During January, we posted two blogs commenting the low hydrological situation in the Alps as precipitation in December came out at the driest level for several decades across CWE and the Alpine region.

The precipitation deficit regarding energy meant nearly 13 TWh, so the snow package was extremely low by New Year. The situation did not improve during January which was icy and dry, and deficit in snow and groundwater was even more severe by the end of January.

Reports from Switzerland and France during February underlined the extreme situation. In the French Alps it was required to reduce production of artificial snow in the slopes to secure public water supply, and in Switzerland, significant hydropower areas reported oft the thinnest snow package since 50 years. The very low groundwater and inflow conditions appeared at the same time as Swiss hydro reservoirs were pretty low due to strong hydropower production due to low nuclear capacity in both Switzerland and France and the cold spell across CWE.

The outlooks for March seem however to be quite promising when it comes to precipitation, as outlooks towards the end of the month indicate 135 % of the normal level for March, see table below.

We see the very low levels during Jan -> February. By the end of February the accumulated deficit was 19 TWh, but expected 135% of normal precipitation during March will reduce the deficit to about 15 TWh. 4 TWh improvement during March is far away to compensate for the accumulated deficit and the still very low snow/groundwater level. We will give more details in the following chapters.

The snow/groundwater charts for the CWE area are a copy of the our webpages.

The snow/groundwater chart shows that current level is about 8 TWh lower than last winter, and 14 TWh lower than normal. Notice the 15 TWh precipitation deficit this winter from the table above. The overall hydro reservoirs have improved somewhat lately compared to the normal curve; outlooks were very bullish by the end of February. The seasonal outlook for the hydro reservoirs is that normal levels will be reached during September by normal precipitation during the summer after the melting season. 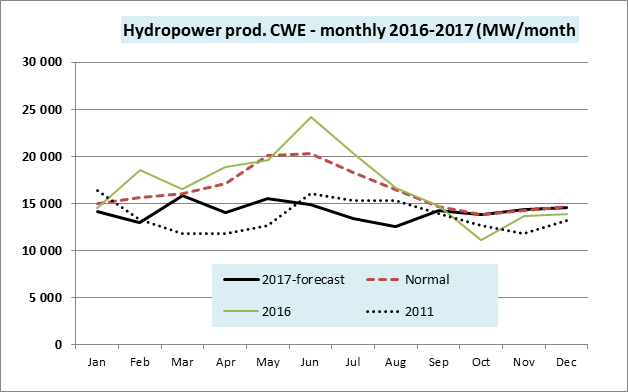 Still, we see reduced hydropower during the summer, although somewhat improved situation since February.

What about the power markets, is it possible to see reactions from the hydropower outlooks on Q2-products across CWE? Based on the chart below we see that Q2-prices for FR and Dec have moved more bearish lately than the SRMC’s for coal/gas have done, which indicate that factors in the power balance have forced the market prices downwards. 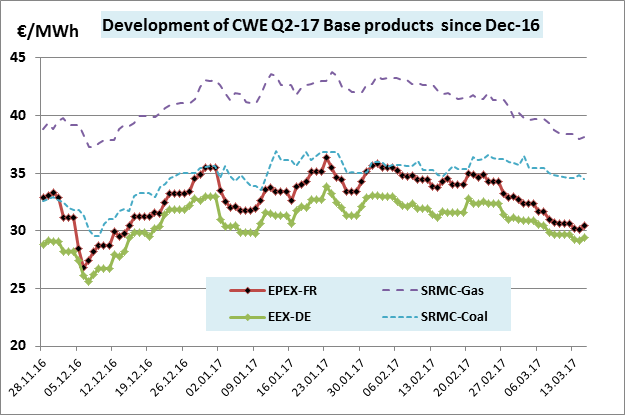 This downward trend is an indication that market may have taken the improved hydropower situation into account, on the other hand, we did not observe an upward movement during the arid December/January that was explained by any power balance factor. The increasing trend during December/January is mainly explained by fuel prices.

We see it still to be an open question is the low hydrological situation is taken sufficiently into account by the traders. Wattsight will follow the hydrology and market situation, and post updates on our blog during Q2.