This summer was dry and hot, and the weather situation has remained unchanged in Europe during September and October. The extreme drought over Central Europes has led to shallow water levels in rivers and melting of glaciers.

Reports about Swiss authorities that needed to protect glacier-parts with blankets to reduce the melting process and nuclear production in Germany having insufficient water flow cooling show the severity of the situation. In this blog post, we will have a closer look at the current hydrological situation and the outlook in Central Western and South-East Europe.

The Situation in Central Western Europe

Since July, the accumulated precipitation for the Central Western Europe (CWE) region has been 60% of normal, which means a deficit of 17 TWh compared to normal. In several areas, we currently see river flows down to 50% of normal level as the drought has become increasingly severe during October. In Switzerland, it's been reported of a situation that occurs only every 10th to 20th year, and flow rates in the Rhine are down to a ten year low. In main rivers like the Rhone in France and the Danube, we currently see flowrates at 35 % and 50% of normal, respectively. For further details about river flows, see our application.

The total hydropower production for CWE region is currently at 70% of normal. Ever since mid of July the production is lower than normal. The production has gradually been reduced since July. The production level for October will come out as the lowest for period 2008-2018 (see here).

The inflows across CWE have been the lowest in the period 2008-2018, see chart below that shows weekly inflows (GWh/week) between week 28 and 42. 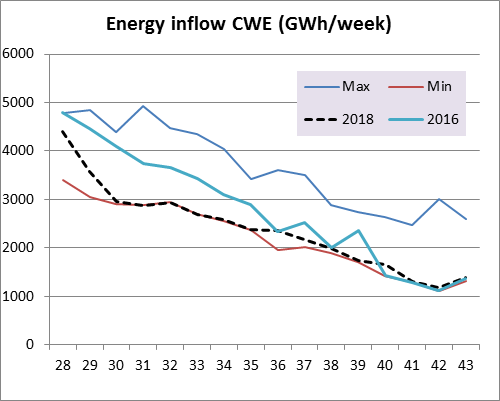 The 2018-inflows have been extremely low, and only 2016 showed a similar level for October. During the coming weekend, we forecast a strong precipitation period. It will be exciting to see how this turns out. If the precipitation outlooks fail, we will most probably see very low inflow and production levels for November and December too. Our predictions for production during November and December is currently 80%-90% of a normal level, which means 1500 – 3000 MW lower than normal.

The Situation in South-Eastern Europe

The hydrological situation the South-Eastern Europe (SEE) area is extremely dry as well. From the start of August, the precipitation has been 70% of normal, and October has been the driest month by 60% of normal. The energy inflows for October is down to 60% of normal. We see from the river map below how the flowrates along the Danube is about 50% of seasonal average.

For the CWE region, rather heavy precipitation is forecasted during the coming weekend. The inflow sensitivity is limited after a long period with drought, and it will be very interesting to follow the situation in the next few weeks. A continued drought will be a very bullish signal to SEE power markets. Wattsight will monitor the situation closely in the weeks to come and will do an updated blog by mid of November.

Contact Head of Analysis - Continental Europe, Eylert Ellefsen or get in touch with Sales to access Wattsight's Hydrology  analysis.