What does Easter mean consumption-wise? Easter is not only an important religious holiday and a traditional vacation season in Europe. It is also one of the periods of the year during which the power consumption is strongly affected by the Holiday Effect.

The social patterns are different from country to country and reflect a variety of habits and traditions. For us, the upcoming Easter is also a moment to reconsider assumptions made within our consumption system and represented by the reduction of power demand attributable to different behavioural patterns. You find some statistics and useful facts below.

The Highest Total and Relative Impact

The highest absolute reduction of consumption due to the Holiday Effect can be observed in Germany, where from Maundy Thursday until Easter Monday around 800 GWh less electricity will be consumed in total. This number contributes to an average of 33,3 GWh/h and 11,1% of normal German consumption during this period.

Germany is followed by this evaluation by Spain, with a total reduction of 426 GWh for the same period. Be aware however that in Spain, Easter Wednesday is also a public holiday. Thus the total reduction for ES will reach 460,3 GWh. The UK and IT follow Spain with 298 GWh, respectively 278,1 GWh less consumption during the Easter holidays. However, the holiday effect for Italy is calculated only for the weekend and Easter Monday, as Good Friday is not a public holiday and has only a bridging effect in our evaluation. 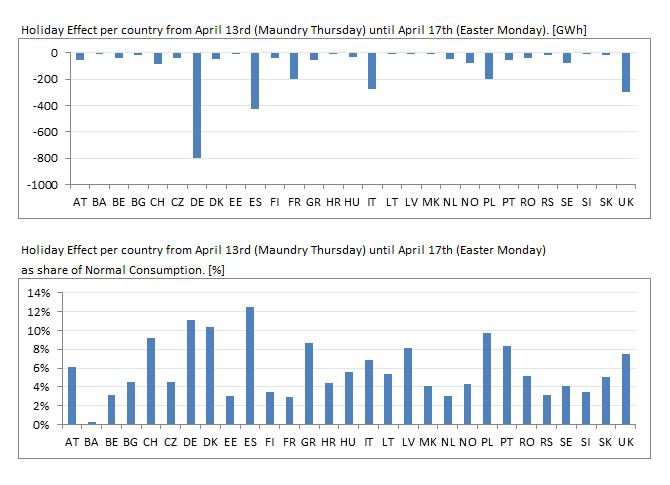 If it comes to the distribution among the single days, Easter Monday has the highest reduction of consumption among most countries, except for Norway and Spain. These countries had Thursday (also partially Easter Wednesday) as public holidays and combined with the school holiday during this week, have a stronger impact on the consumption for Good Friday than in other areas. The reduction in the power demand for Friday, the 14th of April will reach 6,7 GWh in Spain, respectively 1,15 GWh for Norway.

This year Orthodox Easter has celebrated on the same date as the Catholic, Anglican and Protestant Easter celebration. This is however not always the case: even if the dates for the Easter day concurred more often during the past years (see 2010, 2011, 2014 and 2017), next time when Orthodox and Catholic Easter day will occur on the same date will be in 2034!

Where This Difference Comes From?

The Orthodox Church follows the Julian calendar when calculating the date of Easter Day, while the Catholic Church uses the Gregorian calendar. The two dates coincide when the full moon following the equinox, comes so late that it counts as the first full moon after 21st of March in both calendars. There is a 13 days difference between the two calendars, and thus the date does not coincide on a regular basis.

Most of the countries in the SEE area are celebrating both Catholic and Orthodox Easter, but have Good Friday and/or Easter Monday as a public holiday only on the Orthodox Easter celebration. In the SEE region, the highest absolute reduction of consumption for this year’s Easter holidays can be observed in Romania, with 37,5 GWh less consumption, and in Greece with 54,3 GWh.

The graphs below present the distribution of the Holiday Effect between the price areas, as we define them on Wattsight, allowing an interesting cross-regional comparison. The first chart gives absolute figures in GWh, the second a relative view for 2017.