Week Ahead Prices in France Increases Strongly as Consumption Increases

The power supply situation in France is strongly threatened.

as temperatures drop 10-1 deg. C from today’s level. Temperatures next week will then be nearly 10 deg. C below normal.

Peak consumption will then reach about 100 GW, which was close to the level that was recorded in February 2012 (week 6 2012), see chart below. 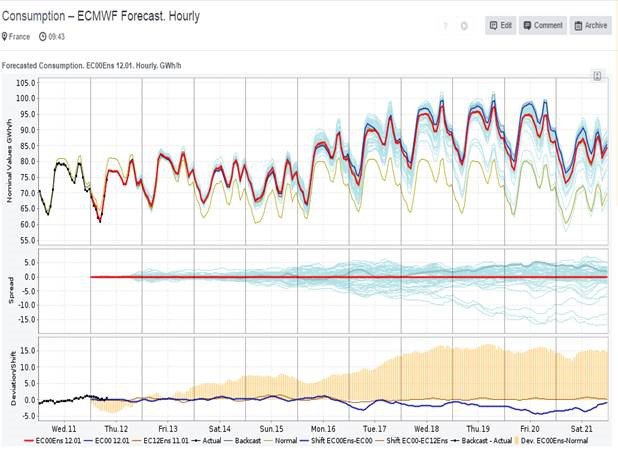 The power balance situation is still influenced by reduced capacity, see chart below, which means that

no additional capacity will come online next week. The current nuclear capacity is nearly 5 GW lower than

we normally see during January. 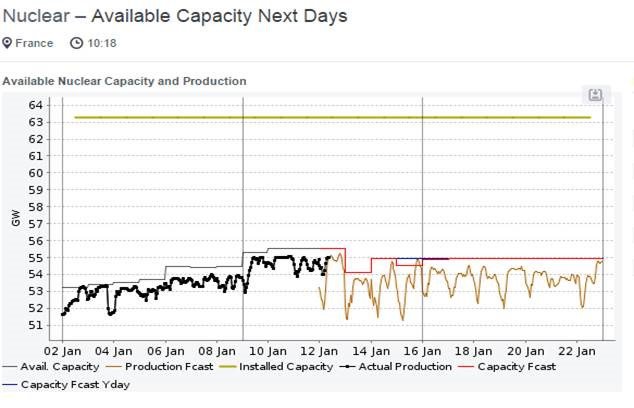 Based on the consumption and nuclear situation the French power balance for peak-hours next week be about 15 – 20 GW more strained than normal. In addition, the hydropower situation is rather scarce so next week will be a challenge for the grid operator RTE to secure the power supply.

On the other hand, RTE has announced means to reduce the consumption both in the industrial and household sector, which can mean a reduction of about 5 GW. Such reduction can mean a lot for the prices in a sensitive situation.

The market prices for week 3 have risen across Europe due to the cold spell, but France is in a particular situation

due to the increased consumption outlooks, see charts below covering France, Italy, UK, Spain and Germany. 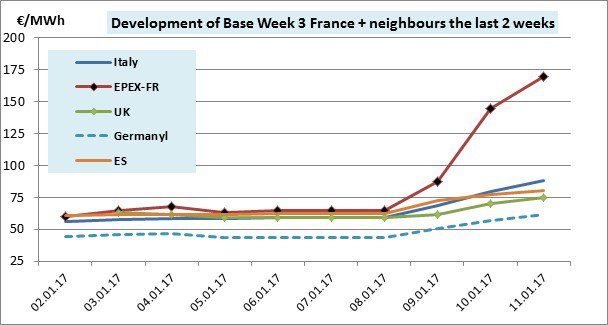 There was a similar incident for week 45 last year, as a strained situation forced the French week Ahead market towards 250 €/MWh. The actual ended significantly lower at 82.44 €/MWh, partly because of lower consumption than forecasted, but the huge difference implies that the market was strongly overpriced due the scarce nuclear situation at that time.

The current market level of about 171 €/MWh may seem overpriced again, our forecast is currently at

The fundamental situation for week 3 is however nearly 10 GW worse than week 45-2016, but is very close to the situation during Week 6-2012, when consumption hit 100 GW for some hours.

See chart below where the hourly prices for workdays these 3 weeks are shown (Wattsight-forecast for week 3), 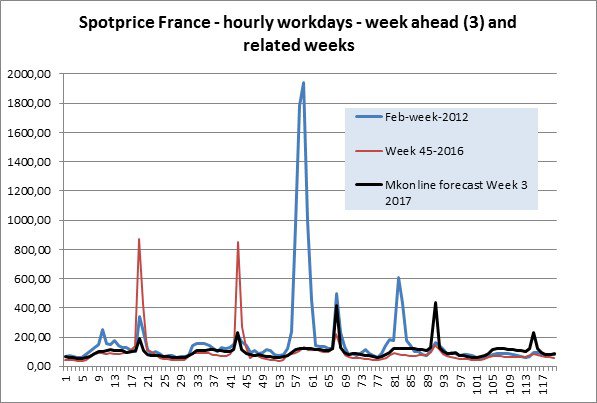 In general, we see a very sensitive price for hour 18. In such a strained situation the French market is often coupled

to the UK-market during their spiking hour. By low wind power, the UK is not secure max. export to France, and then the French price spikes to the UK-level for this single hour.

This means a very volatile price-setting for France in such situation we see next week. We are currently

We can then do a summary of the sensitivity of hour 18 prices for French Base price week 3:

There is, of course, other factors that influence the market price, but we think the hour 18-view shows very clearly how sensitive the French prices for next week will be.

We will follow the situation, and update you on our daily market reports and blog-stories.